Hello! So I didn’t actually think I was going to do this post because I didn’t think I bought enough books this month because I had planned on putting a book-buying ban on myself. That didn’t exactly happen and now my bank account is suffering. For real this time, though, I am not going to be buying any books in November. My TBR is large enough already. Let’s go ahead and get into the books I bought in October!

The first book I bought is Gemina by Amie Kaufman and Jay Kristoff.

This is the second book in the Illuminae Files series and this was actually a preorder because this book came out on October 18. We follow two different characters than the ones from Illuminae, but it is absolutely necessary to read Illuminae first because the two stories tie themselves together. I can’t tell you much about it other than it is uniquely told through texts and emails and IMs. It is really cool. It is also pure science fiction and it is fabulous. Gemina topped Illuminae, which was awesome (Yes, I already read it), but I will talk more about my thoughts in my monthly wrap up.

The next book that I bought is The Hammer of Thor by Rick Riordan.

This is the second book in the Magnus Chase series by Rick Riordan and I am so freaking excited to get into this one. I am about fifty pages into this one and didn’t really have time to read it anymore, but know that I am literally laughing out loud in this book. The humor is at an all time high and I really appreciate it. The first book, The Sword of Summer, follows Magnus Chase (obviously) who is living on the streets of Boston when he is forced to meet someone his mother always told him to stay away from. And what do you know? He ends up learning he is the son of a Norse god. That’s all I can say about it. But know it is great and you definitely should pick it up. And then read this one so we can discuss it together in my review!

The next book I bought is The Winner’s Crime by Marie Rutkoski.

Can we just sit back and admire the beauty of this cover? It is freaking gorgeous. I bought a used edition of this book on Amazon for like three dollars and it was so much better in person. It is hardback, its bound by library binding without all of the annoying stickers and it has deckled edges. What more could you want? But this is the second book in The Winner’s Trilogy, so I can’t tell you much about it. The first book, The Winner’s Curse, focused on Kestrel, our main character, who is the General’s daughter who makes an inpulsive decision that bind a boy named Arin to her. That is literally all I can say without spoiling it. But it is so good. Highly recommend! I am super excited to get into the sequel! 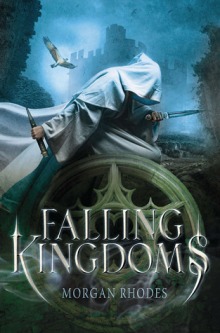 This is the first book in the Falling Kingdoms series and I have been wanting to read this book for so long. I actually bought this when it was marked down on Book Outlet, despite me being on a hugely strict book buying ban. Like I absolutely cannot buy anything else. But I had to get this. I don’t know what it is about other than there is a character named Magnus and this is fantasy. I don’t want to know more. I just really want to go into this book blind. I have heard nothing but fantastic reviews and I am so excited to read this!

The next book that I bought was Rebel Spring by Morgan Rhodes.

Yes, I also bought the second book in the series. I never said I make good decisions! *hides under pile of books* Once again, I know nothing about this book or this series, but I know it is amazing, according to Sasha of Abookutopia on YouTube. She has been raving about this series. I actually bought this and Falling Kingdoms because they were almost completely out of stock on Book Outlet and the bargain price would be gone soon, so I just went ahead and bought these two. I have no impulse control, okay!

And the last book that I bought in the month of October is Oblivion by Jennifer L. Armentrout.

I actually bought the ebook version of this because it has three books in one rather than the one book in the print version. If you aren’t aware, this is the first three books of the Lux series in Daemon’s point of view. I have wanted to read this since it came out last December. I just never got around to getting it. But I am so glad that I did. I am currently reading this and I started it last night. I ended up staying up until 5 am reading it and I finished the Obsidian portion of the book. That’s the first book in the series and it is over 350 pages. I devoured it. I haven’t stayed up reading like that in years and it felt so good to do that! But anyway, if you don’t know, this is a series with aliens and sass and sexiness and just general greatness. You should go into it pretty blind. These books are super easy to read and are the one thing that always gets me out of my reading slumps. This series, in a way, is like a piece of candy. It doesn’t provide you with any nutritional value, but damn it is good. I highly, highly recommend this series!!

But there you have it! That was my October Book Haul. This is going to be the last book haul you see until my Christmas/December/Birthday Book Haul (my birthday is at the end of December), possibly my last one for this year. I am not going to be buying any books whatsoever for the rest of the year. I have way too many on my TBR anyway. What book did you read to celebrate Halloween? I, unfortunately, didn’t have the book I wanted to read here with me at the University (I was going to reread The Forbidden Game by L. J. Smith), so I just read my usual pile of fantasy books! And that is going to be it for this post today. Thank you all so much for reading this, I hope you enjoyed it, and I will see you next time.