Hey, guys! I am very excited about the new year. With a new year, comes a new plan in regards to reading. I don’t really want to make goals because I want to make it a pretty laid back year. My only goals are to read more diverse books, read at least 70 books this year, and to read the five books shown below. I don’t really want to stress myself out about reaching my reading goals (even if I am already running behind this year), so no big long post of goals. But enough with the babble. Let’s get into the five books I want to read in 2017!

The first book I need to read this year is The Last Olympian by Rick Riordan. 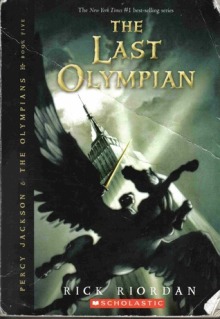 This is the last book in the Percy Jackson series, and I can’t believe I haven’t read this yet. Last year, I marathoned the second, third, and fourth books in the series, but for some reason, I just stopped reading it. Maybe I got distracted by another book (this happens a lot), or maybe I just lost interest. Whatever the reason, I need to finish off this series so I can just say I finished it! This was a series that I originally DNF’d actually, but last year I gave it another try, and I ended up really enjoying it the second time around. But this is a series that follows Percy Jackson, a young boy who discovers he is the son of a Greek god, making him a demigod. This is a series about friendship, Greek mythology, and so much sass. I love this series now, so I am excited to finally finish it off!

The second book I want to try to read is Tales From the Shadowhunter Academy by Cassandra Clare, Maureen Johnson, Sarah Rees Brennan, and Robin Wasserman.

This is the bind up of the all ten novellas in the series, and I have been meaning to read these for forever. I have heard nothing but fantastic things about this series, and I am so excited to read all of them. I have read the first two, and both were great! This series takes place after the events of City of Heavenly Fire and before the events of Lady Midnight (I read Lady Midnight without reading this series and I still really enjoyed it). It follows a character who I can’t name because that is a huge spoiler for City of Heavenly Fire, but we follow this character as they attend the Academy and train and learn about the Shadow World and their role as a Shadowhunter in it. Its great so far, and I am very excited to read the rest of the novellas, so hopefully I can get to this one this year.

The third book I want to try to get to is Yellow Brick War by Danielle Paige.

This is the final book in the fabulous Dorothy Must Die series. I haven’t heard really anything about what people have been thinking about the finale, so I am interested in what I will think of it. This was released early last year, and I have just been putting off reading it for some reason. I think I am terrified of what will happen in this book. A few weeks ago, I tried to read it, but I started it and I felt the tears coming on, so I stopped, and was like, “Nope, nope. I do not need emotional trauma right now.” I am fairly certain this book will wreck me, which will be a feat because its a tiny book. This series if a retelling of sorts of The Wizard of Oz, but in this tale, Dorothy came back to Oz and got power-hungry and became this really evil dictator. A girl from Kansas named Amy Gumm travels to Oz and is tasked to kill Dorothy by the Revolutionary Order of the Wicked. This is an amazing, action-packed series with fantastic writing and a really interesting plot line. I am very excited to get back into this story and am excited to see how Danielle finished off the series!

The fourth book I hope to read is Queen of Shadows by Sarah J. Maas.

This is the fourth book in the Throne of Glass series, and I have consciously put this book off for nearly a year. It was consciously because I am super intimidated by the size of this book, and I am very scared as to what will happen because one of Sarah’s very favorite things to do is to emotionally scar her readers. And kill off our favorite characters. I have heard pretty good things about this one, so I know it will be great, but I am still terrified to read it. I need to get back into this series because I don’t think I will read the rest of this series until I read this one. And if I don’t read it this year, I probably never will. But this series follows a kickass teen assassin named Celaena Sardothien. It has love, loss, and freaking gorgeous writing, so I do highly recommend it! Fingers crossed I read this one.

And the last book I want to read in 2017 is The Book Thief by Markus Zusak. 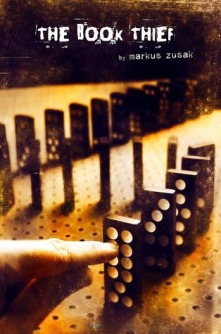 This is a book that everyone loves, and I have started it, but have never finished it. I have been audiobooking this intermittently over the past year. I haven’t made it super far into the novel, and I think I might make faster progress if I were to own a physical copy of the book, which I don’t. And that’s because I want the Special Anniversary Edition with the white cover and I know it looks like a book that is dropped in water, which is significant to the novel. Also, its beautiful. But this is a historical fiction novel set in World War II Germany and it follows a little girl named Liesel Meminger who is a book thief. She steals books when she can and shares them with her neighbors during bombing raids and with the Jewish man hidden in her basement. This sounds like such a powerful story, and I hope I can read it this year because it definitely sounds like something that is up my alley.

And there you have it! Those were the books I plan on reading in 2017. Whats one book you have to read this year? Comment down below! And that is going to be it for this post today. Thank you all so much for reading this, I hope you enjoyed it, and I will see you next time.