Hey, guys! I am super excited to talk about this book because it sounds so good, and I am hoping to get to it very soon. I plan on reading and reviewing it before the end of the week, so keep your eye out for that. I am very pleased to participate in this blog tour as it is my very first one. But this book is a standalone contemporary romance novel, which is exactly what I love to read in the summer, actually. This book also happens to have a “happy ever after” ending, which we sometimes don’t get in contemporaries. However, I will say this book is for mature audiences as it is not YA. If you think you are comfortable reading about steamy and sexy scenes, then I definitely recommend you check this out! But enough with the chitchat. Let’s just get into it!

1. A chaotic or disastrous situation.
2. An utter catastrophe or mess.
3. A devastating calamity or source of trouble.
4. Pepper O’Brien.

As the daughter of a famed film producer, Pepper O’Brien is Hollywood royalty.

Because, unfortunately for her, the old adage is true: money can’t buy everything—including grace, true love, or the ability to not screw up every single opportunity her life has brought her.

After her latest disaster, Pepper moves across the country to start over but, as usual, her life has other plans, namely in the form of Derek Cashette, her former teenage crush and now ridiculously handsome friend of her older brother.

Derek is determined to salvage the train wreck of her life and Pepper’s determined not to let him. Her life is her problem and, dammit, why can’t she be her own hero?

But sometimes fate has other plans. Or maybe it’s hormones. Especially when her rescuer comes with a killer smile, a chest Thor would be jealous of, and a butt that any girl just wants to—

Links to buy this baby: 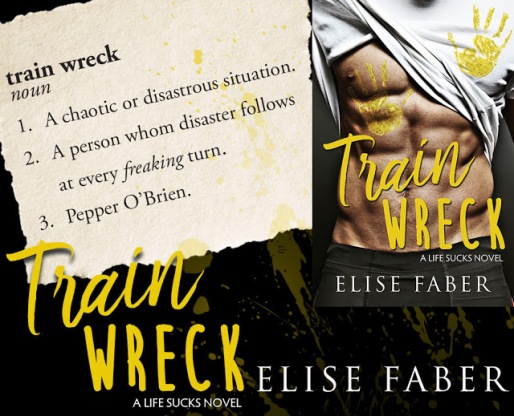 “It was the lipstick that pushed him over the edge. Fire engine red. F*cking kissable.

He reeled her in, silky skin beneath his palms, soft curves against his chest, jasmine and vanilla in his nose.

His mouth was a centimeter from hers and those four letters painted his lips. Moist breath. Hot air. She might as well already be kissing him for how effectively that puff owned him.

“You shouldn’t.” Another breath, another chink in what was fast-becoming a non-existent resistance to Pepper.

Those emerald eyes were brimming with heat, her skin was flushed, her body pressing against his.

But she’d said no.

And so he released her.

Pepper’s eyes slid closed, shuttering that warmth, and she released a shaky breath. “I can’t, Derek.”

His body was on fire, but he nodded.

Eyes opened, sadness in place of desire. The swap was a punch to the gut. “I could never be what you need.”

Gripping the shoes in one hand, Pepper turned and ran barefoot down the beach.

She was gone so fast that she couldn’t have heard him when he said, “I just need you to be you.”

Aside from writing bestselling romances, Elise’s passions are chocolate, Star Wars, and hockey (the order depending on the day and how well her team, the Sharks, are playing).
She and her husband also play as much hockey as they can squeeze into their schedules, so much so that their typical date night is spent on the ice.
Elise is the mom to two exuberant boys and is thoroughly addicted to Dancing with the Stars.
Connect with her on Facebook (facebook.com/elisefaberauthor), Twitter (@faberelise), Instagram (@elisefaber), or visit her on her website at www.elisefaber.com!
Elise is all super active on Social Media. If you’re interested in connecting with her, here are her Social Media links:
Website:  http://www.elisefaber.com
Facebook:  www.facbook.com/elisefaberauthor
Goodreads:  https://www.goodreads.com/author/show/8892745.Elise_Faber
Twitter:  www.twitter.com/faberelise
Instagram: @elisefaber
Facebook Street Team (The Fabinators): https://www.facebook.com/groups/868738829825560/
And there you have it! That was my post for the Trainwreck by Elise Faber Blog Tour! What is your favorite contemporary novel? Comment down below! I would love to know. And that is going to be it for this post today. Thank you all so much for reading this, I hope you enjoyed it, and I will see you next time!